USA Today reports Veterans Affairs Secretary Eric Shinseki has been asked to resign due to growing concerns that the VA needs new leadership. President Obama accepted Shinsekis resignation this morning in the wake of the Veterans Administration healthcare scandal. 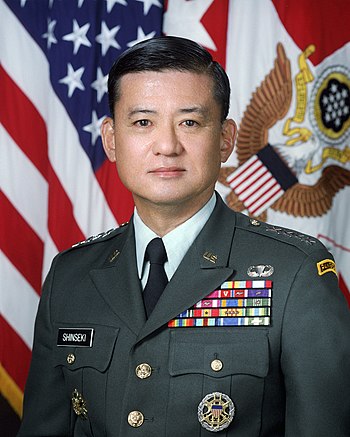 The announcement was made after a short meeting with the Veterans Affairs Secretary. Shinseki admitted he regretted the decision but believed his employment had become too much of a distraction for the agency. Shinseki has apologized for the systematic delays which have plagued the agency over the last several years, leading to the alleged deaths of dozens of veterans.

According to President Obama, Deputy Secretary Sloan Gibson will take temporary charge of running the department until a new Veterans Affair Secretary is nominated and approved for the post. President Obama praised Shinseki, despite his short comings as Veterans Affairs Secretary, noting, He is a very good man. He's been an outstanding soldier. He's a good person who's done exemplary work."

Other changes at the veterans hospitals are also on the way. Its likely other leaders at hospitals across the nation will also be fired. Critics of the President claim, however, that the problems at the hospitals, which led to 1,700 veterans being removed from official lists and kept waiting for appointments, may not be solved by simply shuffling personality around and firing a few people. The issues are much larger and are a systemic, totally unacceptable lack of integrity within some of our veteran health facilities.

Who is to blame for the delays in medical care? Shinseki put much of the blame on the leaders at the hospitals who he felt had instigated and tolerated dishonorable or irresponsible scheduling practices at VA health care facilities.


Medical directors will not get bonuses according to Veterans Affairs Secretary

Unfortunately, the loss of integrity is not confined to just the VA hospital in Phoenix but seems to be widespread. Shinseki admitted he failed to understand the pervasiveness of the problems but promised to hold accountable any medical officials found to have engaged in the same behavior at VA hospitals and clinics across the country. He also has said that no bonuses would be given to any medical directors this year.

Right now an investigation is underway to review more than forty-two VA medical hospitals across the U.S. to find out if they are also delaying care and falsifying patient appointment records.

Unfortunately, not knowing about something is not enough to eliminate blame. "I can't explain the lack of integrity among some of the leaders of our health care facilities. This is something I rarely encountered during 38 years in uniform. And so I will not defend it because it is indefensible," Shinseki said.

Heres to hoping our countrys most important men and women get the medical care they deserve and the federal government proves its up to the task of managing medical careif they cannot do it for the veterans, just wait until they are supposed to provide it to the rest of us.