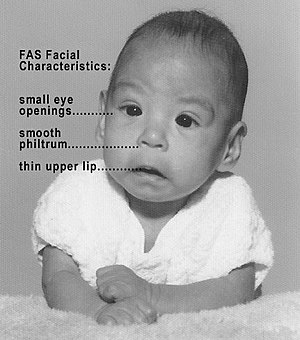 Fetal alcohol spectrum disorders (FASD) is a broad and inclusive term. It encompasses all of the problems that may develop when a person has prenatal alcohol exposure. When an expectant mother drinks alcohol during pregnancy, there are several different mental, neurological and physical difficulties that may take place which range in severity.

Babies with fetal alcohol syndrome also have characteristic facial features, such as flat cheeks, thin lips, small eyes and a short or upturned nose. Fortunately, these features fade as a child matures.

Fetal alcohol effects (FAE) is the other well-known problem than is under the heading of fetal alcohol spectrum disorders. FAE is divided into two categories. They are Alcohol-Related neurodevelopmental disorder (ARND) and Alcohol-Related birth defects (ARBD).

ARND describes various behavioral and mental impairments due to prenatal exposure to alcohol. These include difficulty with attention, judgment and/or memory, poor school performance, learning disabilities and poor impulse control.

ARBD describes major malformations of major organ systems and the skeletal system that result from prenatal exposure to alcohol. Some of these are defects of the bones, kidneys, heart and/or auditory system.

There is something extremely important that needs to be pointed out. While the effects of FAE are not as serious and devastating as those of FAS, they are nonetheless lifelong and irreversible.